If you’ve looked into MOOCs (Massive Online Open Courses) at all, you have probably wondered how successful students are at completing them compared to traditional courses. The short answer? Not very. I’ve seen various numbers floating around in a variety of studies, citing completion rates as low as 4% and as high as 8%, but never have I seen an aggregate number over 10%.

People take MOOCs for a variety of reasons. Some are trying to advance professional goals. Some are working towards improving prerequisite skills for more formal classroom settings. I suspect a lot of people are just curious and want to take in a few lectures on a given topic. With the barrier for entry set so low, it’s no surprise that the dropout rates are high. Many people are probably getting what they want by popping in to take in a few lectures and popping back out.

If I had to guess, though, I’d bet that many MOOC students are also struggling with how to learn is such a non-traditional setting. Having recently completed the Johns Hopkins Data Science Specialization on Coursera (review), I’ve had to think through my own MOOC study strategies, and I wanted to share them. Some of them may seem like common sense. But judging by the completion rates that Dr. Caffo, JHU professor, recently made public, many students have struggled to complete these courses. It appears that most of the courses had a completion rate of around 5%, and the last few classes had a completion rate of about 1%. I’m hopeful some of these ideas might help someone out there who stumbles across this post.

Early on in the JHU Data Science Specialization, I decided I wanted to treat it as much like my college experience as possible. For me, that meant preparing for lectures and taking notes. Fortunately, in every class I’ve taken on Coursera so far, the instructors make the presentation slides available as a PDF. I download every PDF for use as my notes.

With the PDF files, I save them to the cloud for viewing later as needed. Although I’m a big Google Drive user, I actually found I preferred how Microsoft OneDrive rendered these files on some of my devices, so that’s where they go. Additionally, I print out every single lecture and store them in a binder for the class. I know, this is very low tech, it seems like a waste of paper, and can seem very old fashioned, but for my learning style, I found that it was invaluable for the second component of my MOOC study strategies. 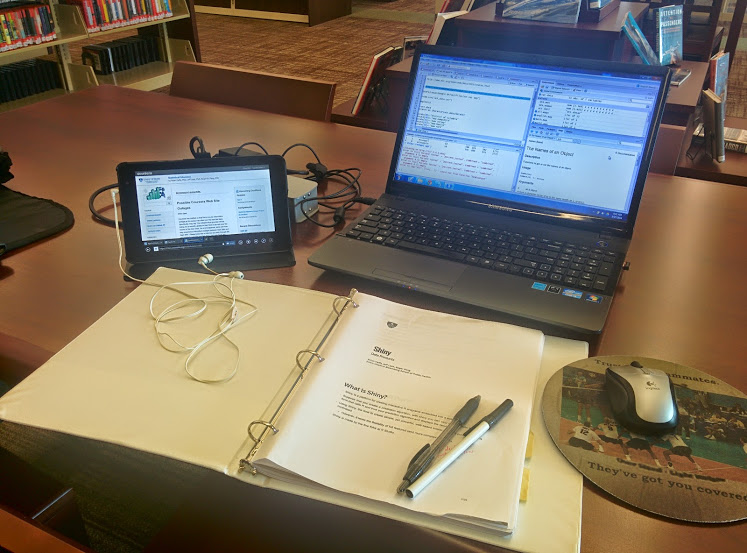 Just about every weekday over my summer break (back when I was still a teacher), I headed off to the library, loaded down with my portable classroom. My “classroom” included three critical components: my Samsung Windows 7 laptop, my Dell Venue 8 Pro tablet, and my backpack, stuffed with a couple of binders full of notes. For a coding based curriculum built around the statistical language of R, I felt that it was unbelievably helpful to have two electronic devices. I used the tablet to watch the lectures while I coded along with my professors on my laptop. While it is a little harder to focus on a recorded lecture than a live one, there is one distinct advantage. There are times when I play back a particularly tricky part of the lecture again and again until I understand it, something that wasn’t so easy to do back in my days as an undergrad in the 90’s.

At the same time as I was watching lectures and coding, I was scribbling notes in the binders. Yes, I know there are apps that would have allowed me to write on the PDFs, but for me, it is still easier to get my ideas down on paper when taking these kinds of notes. It is still also easier to refer back to them later when there is a physical location in the notebook; I’m not sure if anyone else has a brain that works this way. Besides, unless I wanted to get my Nexus 5 involved in the action too, my devices were already occupied with other tasks.

Most of the MOOCs I’ve taken before, including a couple beyond the JHU program, allow multiple chances on quiz questions. I try really hard to get things right on the first try, however. I feel like I understand the question better if I put myself under pressure and don’t rely on those extra chances any more than I have to.

About halfway through the program, I started opening a new R script file for each quiz. I’d use that file as my scratch work, recording any code that I used as well as commenting any concepts that were stressed in the question. This allowed me to refer back to the questions later if I found that a similar concept came up in a later quiz or in a project.

Throughout most of the JHU sequence, programming projects were the most daunting part of courses. They were also what I learned the most from, especially as a person who was returning to programming for the first time in many years. I can only assume that the same would be true of projects in non-programming based Coursera classes. Here are some of the strategies I employed on projects:

Much like when I was a college student, I found it hard to concentrate for more than an hour at a time. I tried to take breaks, getting up to stretch my legs. At one point this summer, I was taking 3 of these courses concurrently, so I needed regular breaks.

During one study break, I answered all of the poll questions Coursera offers in the sidebar of their homepage. One of the questions asked where students take the class. I don’t remember the exact percentage, but I believe that in excess of 80% said “at home.” I’ve tried that at times, but I’m not as productive there as when I go somewhere like the library, or a local community college, or another setting that’s got fewer distractions than my house. Maybe I’m the exception, but I suspect I’m not.

What about you? What study strategies have worked for you in your MOOCs? Please share in the comments below.